I was busy with still adjusting to work, social stuff and family stuff. It was a good month.

Remember I got a new FitBit from my workplace at the end of July and committed to wearing it every day? I set myself a goal for August to hit 400,000 steps (that’s an average of 13,000/steps per day for all 31 days) and I did it! I ended on August 31st with 401,620 steps. I am very pleased with this achievement as I’ve always had the “all or nothing” approach to exercise and activity. I like that I don’t need to spend an hour walking all at once (although sometimes I do) for it to count, I like that all steps count and add up to my daily total. It is very motivating to see that number go up and up and all day long! 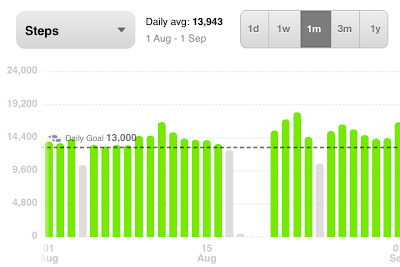 The scale is also going down again on a regular basis and I am sure the hour plus of walking every single day is helping that along.

I did have three days of a fibromyalgia flare up where I didn’t get any steps except hobbling around the apartment, so the fact that I still achieved my goal means a lot to me. The flare up upset me because I had been feeling so much better for so long and it came on so suddenly that I was worried I had completely relapsed, but I now understand that this may happen from time to time and I can try and recognize triggers for the future. In this instance, I think I was just overtired and had tried to do too much, physically, in the days leading up to the flare up, so I’m trying to listen to my body more and rest when I need to.

On a workday, it was not too difficult to get the 13,000 steps as I walk between my office and the train station twice a day (20 minutes each way) and then go for a 30 minute walk at lunch. It’s the weekends, when I have to make a conscious effort to get out and walk that was the challenge but I just told myself that it was not an option and I went out and did it even when I really, really, really didn’t feel like it. Most days I would end up walking more than I set out to – it’s that first step that is always the hardest! 15,000 steps will be a bit more challenging, but it is doable as many days in August I surpassed that or came very close to it.

I also did a 5k event in August. The Toronto 5k Women’s Run. You can read the recap here. It was a lot of fun and I set a new recorded PR for walking 5k. My next event is the Bang & Olufsen 5k on September 8 which I will also be walking. I don’t have anything planned for October or November yet.

I am feeling better physically and mentally than I have since the end of last year and although I still have quite a few changes to make in my life in the second half of 2013, I think I am heading in the right direction.