I woke up this morning with two earaches and a sore throat. Not good. I popped some Tylenol, put warm cloths on my ears and went back to sleep for a few hours. I felt better when I woke up but not great. My neck and head ache and although my ears are better, they really hurt when I swallow.

I also developed blisters on the inside heel of my foot, at the bottom of my foot, isn’t that a weird place? I think they are from my orthotics so I’m going to give them a break for the next couple of days and let the blisters heal.

Today was my Running Room Clinic class – I am not sure who thought it was a good idea to put the practice and the clinic back to back for the 10k clinic…but that’s how it is. We were scheduled to run 6k on a trail behind McMaster University. I love, love, love, these trails.

I ran a trail last night as well and I think because it was a trail I was able to run so far without my knees/calves hurting. I don’t think I would have been able to go that far on asphalt or concrete. I didn’t write anything about last night’s run because I was exhausted when I got home and all I wanted was a hot shower, something to eat and bed. But as a quick recap, the run was good, I felt strong and I actually ran past the point I was supposed to turn around and didn’t realise it until one of the other runners told me. I did 10/1 the entire way and did not need any extra walk breaks. I won’t say it was easy but I felt better than I did the night before and it didn’t seem as hard as I was expecting it to be. My only mistake was to not do a cool down walk at the end like I normally do, I was getting a ride home and I didn’t want to keep the driver waiting, so I ran right to the store and stopped and just did a few minutes of stretching.

Anyway, back to tonight’s run. Thursday nights are my favourite because I get to run with someone, as in alongside, not just at the back of a group. It’s nice to have someone to talk to, it makes the run go quicker and Melissa is so inspiring that I always feel so much better after running with her.

The run itself did not go so well. We walked probably 1/3 of it. It just seemed hard. Both Melissa and I were having trouble with calf pain and being able to keep a steady pace. The trail was beautiful though and the weather was nice. In the end we did 5.55km including warm up. We did a cool down walk but it’s not in the Nike+ data.

In the continuance of "no rest days", tomorrow I am going to go for a long walk - no running - and stretch my calves and quads. 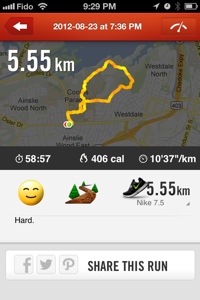